Arta is a city with rich mythology and history and precious sightseeing, bridges, castles, theaters, byzantine churches and mosques . They are all concentrated in the town center and one can discover them in a simple walk.
Starting from the medieval castle in the regional of the city, after wandering in the fortress and the inside citadel, known as ‘Outs Kale’ and walk in the perimeter of the wall of the warriors, admire the Tower of the Watch (a piece of the 17th century) and also the square of the Jewish Martyrs in its entrance, where it was the synagogue Grega and initiate in the history of the Jewish community of the city. You will enter the byzantine temple of St Vasilios of the Market, a building of the 13th century with a rich ceramic decoration (meanders , herring bones, wavy lines, serrated strips). Unique in their kind are the two glazed clay images on the east gable, works of the 14th century.
Moving in the Vasileos Purros street you will reach the Sacred Temple of St Theodora ,patron saint of Arta, an exquisite sample of byzantine architecture and decoration. Two silver shrines with the embossed decoration, which contain the remains of St Theodora and the icon of the saint and are dated at the 17th century, are of great interest.
In a small distance from the temple, in Arachthos street, you can find the Fefzoul mosque. The mosque Fefzoul is the second great monument of the ottoman era of Arta, after the mosque of Feik Pasa-known as Imaret-which is near the river Arachthos out of town. Returning to Vasileos Purrou street and moving to the south, in to your left you will meet the Temple of Apollonas Pithios Sotiras, maybe the most important sanctuary of Ambracia, the building of which dates to the late archaic era, around 500 BC. Just across the street there is the small theater of ancient Ambracia, perhaps the most elegant of the Mediterranean. It is built in the late 4th or 3rd century on the foundations of the baths of the 4th century as well as the foundations of the buildings of the classical city.

South-est in the same street you will meet Skoufa square . Climbing the steps you will face the ‘noblewoman’ of todays Arta and proud and joy of Komnenian Moguls the byzantine temple of Panagia the Parigoritria, built at the end of the 13 century AD (1285-1289). The originality of its design, its architectural innovations and its rich ceramic decoration render it as a unique sample of byzantine church building around the christian, orthodox world. The roof of the temple has five domes, from which the central one is based upon double columns and gives the impression that it hovers. There was catholic of a big monastery, from which 16 cells and the bank are saved.
Following Kommenos street, just before the municipal stadium of the city, it is developed the archaeological area of the west Necropolis of the ancient Ambacia. The west necropolis extends along the ancient avenue-Sacred Road 12 m wide which led to Ambracus, the haven of the city in the Ambracicus gulf.
In approximately 300 meters there is the archaeological museum of Arta. The presentation of the exhibits is thematic and includes three big sections; public life, cemeteries and private life of the Ambracian people. In addition, they are presented findings of the area from the paleolithic era to the roman times. It includes various categories of objects, mostly of the Hellenic period such as clay pots of all kinds, figurines, coins, copper vessels, armor, gold, silver and also copper jewels and a lot of other small objects made of stone, iron, glass and lead. Also, stone objects such as tombstones, votive degrees, architectonic parts and a few works of plastic. In 200 meters, parallel to Arachthos you will reach the historic Bridge of Arta, known from the folklore song which describes the trouble of its erection as ‘they built it all day long but at night it was torn down’ as well as the legend about the master builder who sacrificed his wife to found it. Next to it stands the historic plane tree, a preserved monument of nature, since 1976 and from the other side the old custom which today houses the Folklore Museum of the city.

15 km west of Rodavgi, in Kastri, there is the archaeological area of Orraon. The small castle city of Molossoi, built in the 4th century, was fortified with a wall and managed to salvage its 100 houses. In the area are saved the remains of well preserved houses of the classical period. According to the archaeologists between the holdings there were three-meter roads. In the north section there is the public space, which includes a big tank and a small administrative building. It is likely that there was a sanctuary in the southeast.

The residents were engaged with the agriculture and the livestock but they weren’t poor. Their houses had an acreage of about 270 sqm and besides of the bedrooms they had maid rooms, areas for symposiums and baths, weaving mills and a working space where they stored their farming tools. They, also, had stables for the horses.

The gate of the entrance led to the backyard through a corridor. The house house that is saved has in the center of the yard a big hearth. In the stone built walls slits are visible, probably for the lighting of the houses, instead of windows. The space of the men stood out because it had big windows with wooden shutters.

Orraon was the only one of the four well known Molassian cities which put up resistance to the Romans, unfortunately with out getting escaping the destructive mania of Aimilius Paul in 168/167 BC. That was its end. 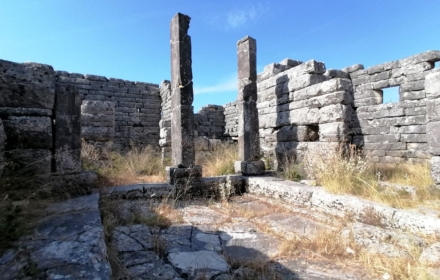 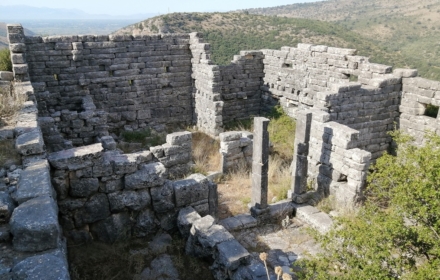 Leaving behind the west side of Arachthos, which lead to Plaka, which is known for the famous arched bridge. Even though Arachthos swept it away in 2015 the state made sure for its reconstruction and it is still standing there to connect the shores. At its side is saved a two storey stone-built building which was functioning as the greek outpost and customs up until 1913. It was also the garrison of ELAS during the years of national resistance and there was signed the historic agreement of Plaka in 1944 between ELAS (Greek People’s Liberation Army) and EDES ( National Republican Greek League) for a final cessation of civil hostilities.

There are many companies providing alternative tourism services in the area, which offer exciting rafting descents on the rapid rivers Arachthos and Kalarrytiko and organize hiking trails in the surrounding area.

Following the signs of the central road you can be found in Agnanta, one of the biggest villages of Tzoumerka with lush forests of firs, planes, arbutus and heather with spring waters which move the watermills and the mantania, property of the church. There, you can find the Folklore museum of the historical and folklore company of Tzoumerka.

Ascending from the main road you meet the entrance of the cave of Anemotrypa with the uniquely sculpted colored stalactites and stalagmites, but also with the three ponds in shades of brass and white, which have been formed over the years. The peak of Tzoumerka, Stroggyla, is rising impressive and soon you will reach the place of cattle breeders and the big village of Tzoumerka, Plamanta, which is built in its shadow.

If you move further north you will meet the single-arched stone bridge of Sygkounas, which crowns the banks of the Kalarrytikos river.

Driving carefully in a road with many turns, upwards the canyon of the river Kalarrytiko you will see the monastery of Kipinas, perched on a vertical rock, the founding of which dates in the 13th century. The access to the monastery is made by a path that is carved in the rock and a hanging wooden bridge, which was raised by the monks to cut off the access.

Continuing your course you reach the stone-built village of Kalarryta, one of the two Vlach-speaking villages, separated by the secluded ravine of Kalarryta. Kalarrytes are built in the slope Poulianain 1200m altitude, where across Syrrakos in the slope of mountain Lamkos in 1150m literally hang above the valley of the river Hrousiou. The two villages are connected with a hiking trail of wild beauty and some steep spots. It is about a route 1 1-30 hours which first it descends to the river Hrousios and then it ascends.

Leaving behind the historic bridge of Arta and moving to the south, crossing the valley of Arta with the famous orange groves and kiwi crops, we reach the little port of Salaora where the fishermen of the area moor their boats. In front of us stretches the endless blue of the Ambracicos gulf. One of the largest and most important wetlands in Greece, which apart from the deltas of the rivers Arachthos and Louros, consists of the lagoons of Rodias, Logarou, Tsokalou, and many smaller ones, alternating with strips of sand which separate the lagoons from the open sea and the mudflats. It hosts about 290 species of rare birds and as such is suitable for bird watching and among other things it is known for its bottle nose dolphins , sea turtles, eels and shrimp (prawns of the Ambracian).

In about 8km, following the land strip which separates the Ambracian Gulf and the lagoon of Logaros, on the right we see the ivaria (natural fish farms) and reach Koronisia. The little village of the fishermen with the picturesque little port.
It is worth visiting the forest of Pera island, walking the sand strips which are formed in cycles from the small lagoon Sakoletsi, the temple of Panagia of Koronisia and admire the remarkable murals of the 17th century and the chapel of the local saint, St Onoufrios. Also , someone can find very interesting the ottoman observatory in the Ambracian Gulf. 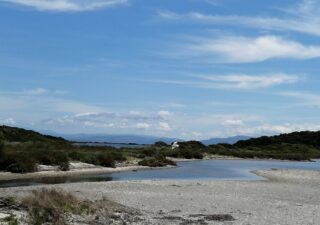 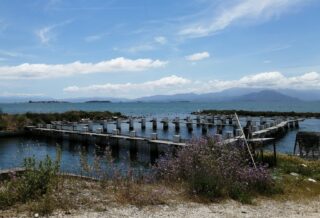 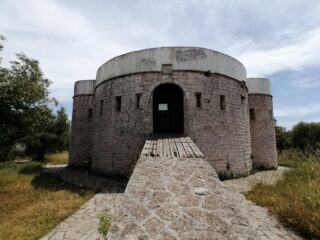 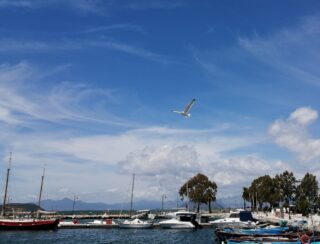 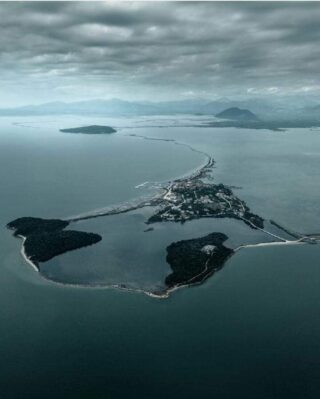 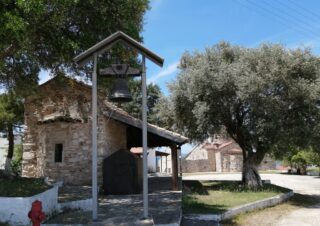 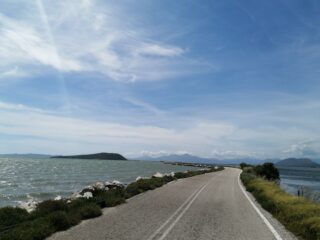 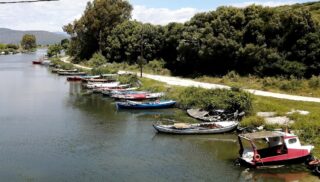 Another beautiful destination in the Ambracian Gulf is the small port of Kopraina, which is only 19 km away from the city of Arta, following the old national road of Arta/Agrinio. Famous from the movie of the director Dinos Dimopoulos ‘the little dolphin of Ambracian’ , it is located at the mouth of the river Vovos which flows fresh water in the lagoon of Agrilos.
In the port stand the imposing restored stone buildings of the old customs, warehouses and hotel, witnesses of a commercially profitable past of the settlement, which until the beginning of the 20th century was the main transit center of Arta. Today there is an environmental education center (library, activity room, workshops), the museum of natural history with various exhibits of the living life of the Ambracian Gulf and the fishing museum at the entrance of which stretch the rails and wagons, which once loaded with goods flowed from the old port.
Walking for about a kilometer the stone built cobbled path between the tamarisk trees, the libardas, and the oleanders, having on our right the Vovo river, we reach the famous lighthouse of Kopraina, where the lighthouse museum operates. 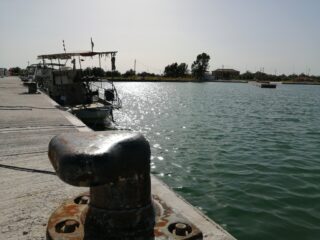 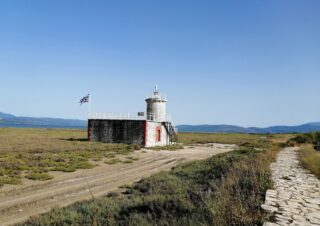 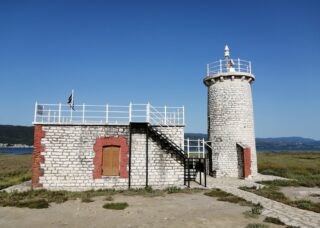 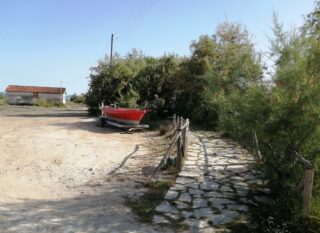 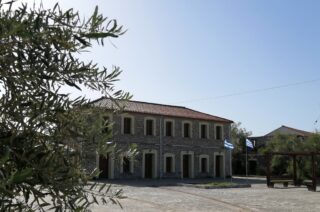